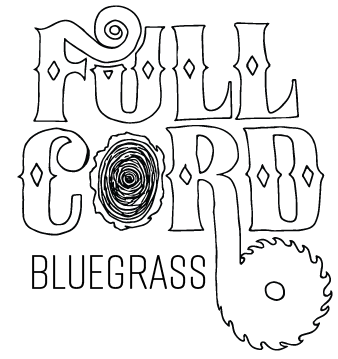 Grand Haven, MI | View Website
Our Story Sawin' logs and pickin' bluegrass comes naturally to the members of Full Cord. Full Cord has an extraordinary song base that spans through originals, newgrass, traditional, covers, country, swing, jazz and more. The skill level and training of the members of Full Cord provides a lot of room for stylizing to their hearts content and doing it exceptionally well. With two shows never the same their followers in Michigan try to catch every show never knowing what teaser or new song will be in the set list. This is not your Grandpa's bluegrass, although they can blow some rocking chairs back with their trad skills. Born out of wood, steel and horse hair, the band takes the traditional music to a level rarely seen along the back roads of Michigan. With sounds reminiscent of newgrass bands from decades prior, the band electrifies audiences with mind bending riffs and hard driving bluegrass. If you haven't seen this band in action, this is a must! This is not your Grandpa's bluegrass, although they can blow some rocking chairs back with their trad skills. THE BAND ERIC LANGEJANS Eric is a multi-instrumentalist with an exceptional ear for music. He has been in many bands including Down Home and Woodpile. Affectionately called Fast Eric by his peers, his lighting fast riffs on the guitar are a sight to behold and a joy to listen to. TODD KIRCHNER Todd has played bass since his early teens and grew up attending bluegrass festivals with a family full of bluegrass musicians. He has honed his skills on the upright bass over the years and has played in several bluegrass bands including Rusty Thimbles, Continental Blue, and Who Hit John? GRANT FLICK Of Bowling Green, Ohio, has been playing and performing for the past eight years on many instruments including violin, mandolin, tenor guitar, tenor banjo, and nyckelharpa. Primarily, his interests are jazz/swing, bluegrass, and new acoustic music. Currently, his main original musical projects include Westbound Situation and Warren & Flick. He has received numerous music awards including the 2013 Daniel Pearl Memorial Violin, and he was a 2015 finalist in the Walnut Valley Festival Fiddle Competition in Winfield, Kansas, as well as a 2017 finalist at the Freshgrass Fiddle Competition in North Adams, Massachusetts. He has been selected as a two time participant (2015 and 2016) of the Acoustic Music Seminar held at the Savannah Music Festival in Savannah, Georgia. He has taught workshops at the Tenor Guitar Gathering (Astoria, Oregon), Falling Waters Music Camp (Ithaca, New York), and Augusta Bluegrass Week (Elkins, West Virginia). He has performed at the Grey Fox Bluegrass Festival, Red Wing Roots Festival, Indiana Fiddlers Gathering, and many other festivals. Frank Vignola, Mike Marshall, Julian Lage, and Darol Anger are just some of the notable musicians with whom Grant has appeared on stage. Grant is attending University of Michigan for jazz studies. BRIAN OBERLIN Brian is an internationally acclaimed mandolin player and educator. During his decades long professional career, Brian has been playing swing, bluegrass, and Italian classical as a solo mandolinist and vocalist. Brian celebrated the release of his 20th album in May, 2016; Troubadour which features Brian playing solo and singing original music. Along with the myriad of award-winning bands (The Journeymen, GER Mandolin Orchestra with Mike Marshall and Twin Mandolin Slingers with Evan J. Marshall) and ensembles he has collaborated with throughout the United States and Europe, Brian is also the founder and director of the River of the West Mandolin Camp, the Great Lakes Mandolin Camp and the Oregon Mandolin Orchestra. Brian was a top ten finalist at the 2013 Telluride Troubadour Contest, an instructor/performer at the 2012, 2013 and 2017 International Mandolin Academy in Italy, a featured soloist at the 2014 EuroFest Plucked String Festival in Bruchsal, Germany, and a featured soloist at the 2015 Mandolin Upgrade festival in Berlin, Germany. When he is not performing, Brian teaches music to children and adults at art centers, cultural events, festivals, camps, music schools and academies. More info on Brian can be found at www.mandoberlin.com

A Tale of Brownie Friends